How to Calculate Laser Beam Size

If you’re not familiar with the math behind a “Gaussian” you might wonder why this would be.  Here’s why: 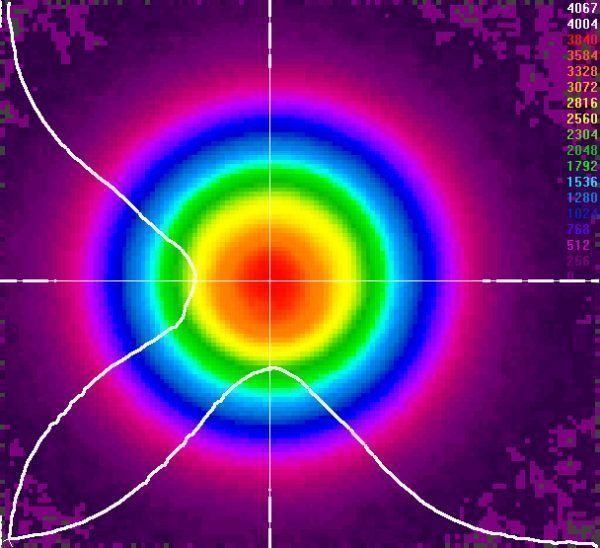 The image above (from BeamGage) is a two-dimensional display of power in space.  Color is used to represent intensity.

So, where should the line be drawn?  What is the beam size?  Is it where the blue ends?  The purple?

Gaussian beams have a bell-shaped intensity curve. That means that we can’t just say the beam width is measured between the ends of the beam, since a Gaussian beam never ends.  In reality, at a certain point the hypothetical laser power is so low as to be drowned out by ambient noise.  But that doesn’t help answer the question of where to measure beam width.

There are several ways to define beam width for Gaussian beams, but here are a few: 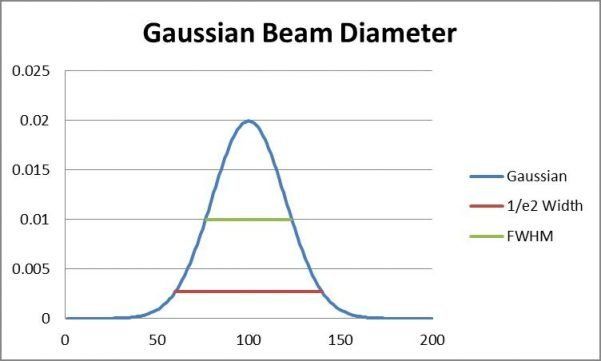 This is probably the most commonly used in research circles.  By the 1/e2 method, you measure beam width between the two points where the intensity is 1/e2 of the peak value.  Clear definition, but only about 86% of the laser power is contained within the 1/e2 width.

(Our new “power through aperture” calculator lets you easily see how much of the laser will pass through a given area.  For example, choose a beam width of 8 mm and aperture of 10 mm.  Common sense states that 100% should pass through, since 10 > 8.  However, don’t forget that only 86% of the beam is contained within the 8 mm beam diameter.  So how much of the laser is in 10 mm?  Check the calculator for the answer.)

Used most often in industrial contexts, this is the simplest method to understand.  Full-width, half max.  That is to say the diameter measured between the two points at which the intensity is half the peak.  (Full width is meant to indicate beam diameter rather than half width, which would be the radius.)

D4σ stands for distance between the 4σ values, i.e., four times the standard deviation.  This is the ISO standard method for maximum accuracy.  However it can overly weight the wings if not using proper background subtraction, such as UltraCal:

I’ve really only scratched the surface here.  I didn’t mention knife edge or other methods for measuring beam width.

Greg Slobodzian, Ophir-Spiricon Director of Engineering (retired) discusses some of these beam width calculation methods, as well as how to measure the beam width: