How to measure the peak power of a pulsed laser

Here’s a peak power calculator, if that’s what you wanted.

Read on if you’re interested in how to measure the real pulse shape of your laser – and use it to calculate the peak power.

Ophir offers a nanosecond response time photodetector which is designed to measure the temporal behavior of pulsed lasers, the FPS-1 photodetector.  The FPS-1 is easily connected to an oscilloscope which displays a temporal trace of the power output during the pulse. Since the oscilloscope does not display a trace of absolute power output over time, but rather the relative pulse behavior and shape, it cannot be used directly to find the peak power. However, with a simple calculation the trace may be used to derive the peak power of a pulse. 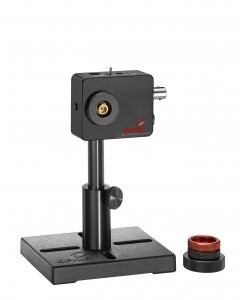 For example in the trace below let us say the total energy measured is 10mJ.

d)      Find the time duration that when multiplied by the peak power in A.U. will give the same area as the preceding.

This video also explains how to measure peak power, and includes a lot more about the differences between peak and average power:

A shortcut for calculating Power Density of a laser beam

Use StarLab to enhance your system efficiency

How to measure a low power broadband light source?