A short wavelength excimer laser, which produces light in the ultra violet spectrum,   has unique characteristics that set it apart from other lasers. These characteristics enable its use in applications that would be challenging for other lasers, but also introduce unique issues when it comes to measuring its beam.

193nm Excimer lasers are often used in certain applications involving laser ablation of materials in which there is a need for very high precision and minimal heating. The ablation mechanism of these short wavelength beams does not involve heating, but rather dissociation of the target material; therefore the material can be cut or similarly processed without significant thermal effects. For example, excimer lasers are used for Lasik surgery, where a laser has to be targeted at a small location in the eye, without causing residual heat damage to surrounding tissue. Excimer lasers are also used for the production of microchips, where a very fine pattern has to be generated by the laser on semiconductor wafers; the short wavelengths enable the beam to image a very fine pattern from a mask which in turn enables the photolithographic process to create smaller features on the wafer. This is very important as advancing technology requires constantly increasing density of devices on a chip.

Even though every laser system requires measurement of its basic parameters at some level, it is especially important to correctly monitor and measure the excimer laser which operates in such delicate and demanding applications. 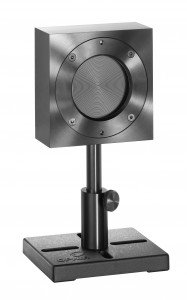 Measuring a 193nm excimer laser accurately requires special attention, since an excimer laser beam interacts with ordinary matter in unique ways. When directing the excimer laser beam into a sensor, the light interacts with the air and water vapor before the beam reaches the sensor. Interaction between the excimer laser beam and the air may cause an error of up to one percent per each centimeter of air. Therefore, for accurate measurements, a user should verify that the distance from the laser to the measurement device is the same as the distance to the point at which he wishes to know the power/energy. Furthermore, when using an energy sensor with a diffuser, the diffuser surface can adsorb gas and water vapor when left for several days without use and the absorbed water vapor may lower the reading by several percent. The laser beam should therefore be directed to the sensor for up to one minute or until the reading stabilizes prior to taking the measurement.

Use StarLab to enhance your system efficiency »