An excimer laser, sometimes more correctly called an exciplex laser, is a form of ultraviolet laser which is commonly used in the production of microelectronic devices, semiconductor based integrated circuits or “chips”, eye surgery, and micromachining.

As important as ultraviolet excimer lasers are for many applications, measuring them, is not always such an easy task.

Let’s say you’re an engineer in a company that’s responsible for EXCIMER LASERS PERFORMANCE, and you need to know how evenly its excimer laser beam was distributed in space.

You tried imaging your beam with specialized ultraviolet cameras, but all they got was a grey-scale image – certainly does not show the distribution very clearly. So, you turned to Ophir solution – the BeamGage, knowing how accurate it is (the only laser profiling system with algorithms that meet ISO standards) . However, the power you needed to measure was too low (~μWs) to cause the UV target to fluoresce.

It should be noted that although these CCD cameras respond down to 190 nm, Ophir generally recommend using a UV image converter (the target and lens) to avoid damage to the camera.

Since the very low power lessened the odds of damage the camera, after consulting with one of Ophir experts, you’ve decided together to remove the UV image converter and profile the beam directly.

And using state-of-the-art beam profiling equipment you got this: BeamGage has a summing feature which simply sums multiple frames together.  This is an excellent solution for a low-power beam like our case here.  Since the noise is random while the signal remains consistent, adding frames together has a similar effect to raising the power of the laser beam while keeping the noise pretty much as it is. 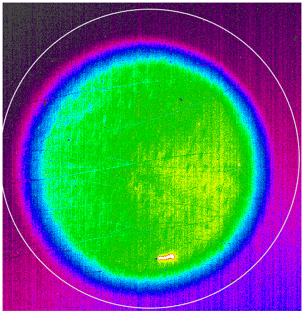 Now you can calculate how uniform the laser beam is and quantify your laser’s irregularities and tweak optical parameters while monitoring the progress in BeamGage to ensure optimal uniformity.

Laser Power Density: What, Why, and How to Calculate It