It all started when a slow-witted engineer was teased one too many times.  Tired of being the butt of all his colleagues’ jokes, he plotted revenge.  “I will create such a convoluted unit for dynamic range that none of them will be able to understand it.  We’ll see who’s laughing then.  Mwahaha!  Instead of simply stating that the range is 20:1 or 3000:1, let’s take the log of that ratio and multiply by 10.  Or 20.  No one will ever get it straight!  I shall call it – the decibel.”[1]

What is dynamic range anyway?

Most laser beam profiling systems include dynamic range in their specifications.  What exactly does this mean?  The complete answer might depend on which type of dynamic range is being referred to, as you’ll see below.  Suffice it to say that dynamic range is meant to characterize the ratio between the highest and lowest measurable signals (i.e., the signal range).

Do you use decibels or decibels?

That’s right – there are two types of decibels, sometimes distinguished by a subscripted “power” or “volts,” but all too often left naked of any description.

I know.  I also think there should be a $3 fine for each ambiguous use of the term.  For now, though, let me explain the background.

There are two formulas for dynamic range:

The reason for these two forms is so both a power and a voltage ratio output a dynamic range for power.  If you remember a little basic physics, power is proportional to voltage squared.  Now if you also recall some algebra, a square within a log is the same as twice the log.  In other words (or symbols):

The logical approach is to use dBpower for a power ratio and dBvolts for voltage.  In some cases, though, it isn’t so clear which to use.  In the camera industry, for example, the general consensus is to use dBvolts.  For optical measurement, however, dBpower is often preferred, as it’s more directly related to the light being measured.  When cameras are used for optical measurement, as with beam profiling, all bets are off.

So, which should be used: dBpower or dBvolts?  A common answer might be – when in doubt, pick the higher value since it looks better.  At a more upstanding institution, though, the answer is that it depends on what is trying to be conveyed.  What kind of signal are we dealing with?  What value will be more helpful to the consumer? 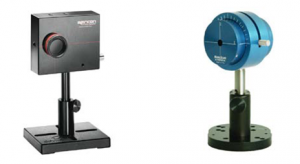 These are the questions we ask ourselves when trying to determine which form of dB to use.  Of course, it’s best to state outright which units are being used in any case where it’s not obvious.  Fun fact: most of our Spiricon CCD cameras use dBvolts while the NanoScan family uses dBpower.

Have you been suffering from dynamic range ambiguities?  Any tips?

This is the first part of a short series dealing with dynamic range.  Read the second part here.

[1] Actually, the decibel was invented in Bell Labs in the 1920s.  Although it is convoluted, it’s also a very useful method of measuring wide ranges or ratios.  See http://en.wikipedia.org/wiki/Decibel#History for more details. 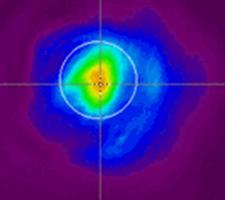