Many laser applications use pulsed beams, and pulse widths are becoming very short – even fs pulses are not uncommon.

UV wavelengths are particularly useful in many such applications; because of the high photon energy associated with the short wavelength, non-thermal mechanisms can be used to ablate or cut material. This enables some unique applications in medicine and material processing.

The challenge: Designing and measuring the laser

Energy per pulse of repetitively pulsed lasers is typically measured using a pyroelectric sensor.
The heat generated by the absorption of a laser pulse in the pyroelectric crystal (…skipping a few steps of course…) produces a transient measurable voltage (proportional to the absorbed energy) – which can be measured.

However, those same properties of UV light that enable ablating and cutting material, can affect the material of which the sensor is made and change its properties because of UV exposure. Not a good thing to happen to a sensor being used for measuring!

For applications involving still higher energy densities, some sensors have a diffuser added. The diffuser spreads the beam and thereby reduces the energy density on the absorber, so that the sensor can handle higher energy densities than it otherwise would have. A diffuser does not affect the response time so it can be used with a metallic absorber coating without sacrificing speed, meaning maximum pulse rate.

Ophir sensors with diffusers have the letters ‘DIF’ or ‘DIFH’ in the model name, for example, ‘PE50-DIF-C’.

Unfortunately, diffusers aren’t immune to the effects of UV radiation. Very often the diffuser changes its transmission after exposure to UV, causing a noticeable drift in the energy measurement; this is the result of organic contaminants on the diffuser getting carbonized. Further exposure to UV light ablates the carbonized contaminants and the transmission recovers to its original value.
A common recommendation is to expose the diffuser to UV for several minutes before the actual measurement to help ensure stable performance, but this isn’t always possible or convenient.

Luckily, there is a solution:

It does this thanks to a special surface microstructure that prevents the accumulation of contamination.

The PE50U-DIFH-C and PE50BF-DIFH-C are Ophir’s premium energy sensors. They are calibrated at wavelengths starting from 193nm all the way to 2.94 micrometers, and have a particularly high damage threshold even at these UV wavelengths (1 J/cm2 at 193nm).

The PE50BF-DIFH-C , with its “BF” broadband absorber  under the diffuser, has a very high damage threshold over its entire spectral range – up to 6 J/cm2 for even the shortest pulses (up to 90 J/cm2 for ms pulses).

These 2 sensors are the best solution for pulsed lasers at 193nm and 248nm.They offer –

To learn more, watch the video, contact Ophir, directly, through your local Ophir representative, or visit our website.

Laser Measurement System Design Considerations– How to Measure the Beam Power Without Damaging Your Sensor? » 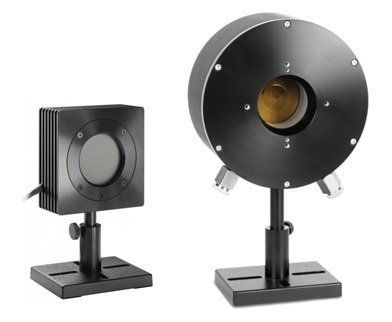