So you acquired a brand new laser power sensor, is there anything else you should know to ensure high accuracy of your laser measurements?

There are a few factors you should keep in mind in general and depending on the type of sensor.

Centering the beam and small apertures

Power meter sensors are calibrated with the beam carefully centered on the sensor. The reading will vary with beam position, in some cases as much as ±2%. Therefore to get the most accurate reading, always center the beam on the sensor. Some laser sensors have small apertures, in some cases as small as 5mm. It is especially important to center the beam on sensors with small apertures, otherwise some of the beam may be outside the aperture of the sensor and the reading will be low. Even when the beam or burn spot looks quite small to the eye, quite a bit of the power or energy can be far from the center. Therefore it is preferred that the aperture of the sensor be 2 times the nominal beam diameter and the beam should be centered.

Ophir now has a new series of sensors, The BeamTrack series, that indicate the beam size and position and thus help keep the beam centered to obtain the most accurate reading.

Another factor that can influence a power reading on a thermal laser sensor is the presence of any additional ambient heat sources. For example, if the laser system is hot and radiates heat independent of the heat from laser beam, that heat will also be measured by the thermal sensor, thus causing a false higher power reading. In general, a user should measure the power on the sensor before applying the laser beam to make sure no additional sources are influencing the power.

Ophir power meters have an “offset” function to zero the reading and eliminate such effects. In case of interference as above, the user should block the laser beam (but not the other sources of heat) and push the offset button to eliminate the extraneous signal. Pyroelectric sensors use a pyroelectric crystal that generates an electric charge proportional to the heat absorbed. These crystals produce a signal upon mechanical flexure as well as heat. Therefore a false reading can result from vibration of the pyroelectric sensor. For example, if pyroelectric measurements are taken at a location with noisy machinery producing a strong acoustic vibration signal this will result in false reading. Some of Ophir’s power/energy sensors include a user-settable minimum energy setting to eliminate false readings due to acoustic noise. When measuring very small signals, the vibration signal cannot be ignored since adjusting the threshold will eliminate good signals as well. In this case, Ophir now has an additional solution, a shock absorbing mounting post. The Shock Absorber mounting post features a screw embedded in rubber that provides mechanical isolation between the post and the sensor head. This mechanical isolation significantly reduces false triggering. The shock absorber reduces the vibration susceptibility of the sensor and still keeps the same sensitivity to good signals.

The new Ophir BeamTrack sensor- You won’t believe how useful it is! » 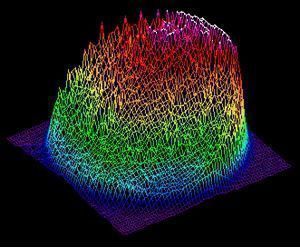