There’s No Wrong Way to Use a BeamTrack Sensor

Unlike a traditional thermal sensor which is basically just used for power, the BeamTrack sensor can measure several different aspects of your laser.

We also call them power/position/size sensors, since those are the three fundamental functions of a BeamTrack sensor.  But it doesn’t have to stop there.

Yes, if you need to measure your beam power, position, and size, then of course you already know that BeamTrack is the exact product you need.

But there are a few less traditional uses for BeamTrack: 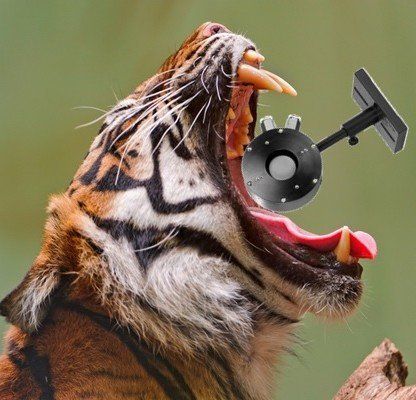 But there’s no right way either.  Please don’t eat your laser measurement equipment.

It should be obvious that a meter which detects the laser power and beam size (for a Gaussian laser), can calculate the power density of that laser.

This isn’t quite automatic, but here’s how you can do it, without too much trouble.

The density screen is actually available on regular power sensors too, but you’ll have to get the beam size from another source in that case.

We have customers that use a BeamTrack meter even though they really just need to measure power.

We naturally asked them why invest in a meter with extraneous functions.  They explained that the position and pointing stability features of the BeamTrack sensor made sure their laser was hitting the sensor right in the middle, and that the beam wasn’t too large for the aperture.

They were very particular about this since they needed high accuracy for their application.

How Will You Use the BeamTrack?

Now it’s your turn.  How do you use your BeamTrack sensor?  What would you use it for if you had it right now?

Let me know down in the comments.

Your suggestion could lead to a new software option or a new type of BeamTrack sensor.

Peak power vs. Average Power What is it, and how do I measure it?