There are a few issues that come into play when discussing narrow laser beams: accuracy, saturation, damage, and more.  I’m just going to discuss accuracy today.  The question is really: how many pixels do I need in my beam to get a “reasonable” resolution?

How many pixels does it take to measure a laser?

This isn’t a hard-and-fast rule, but generally 10 pixels (diameter) would be a good lower limit.  As you see in the pictures below, 10 pixels is quite choppy, while 30 is better, and 100 is quite good – at that point the resolution is high enough that it looks completely smooth. 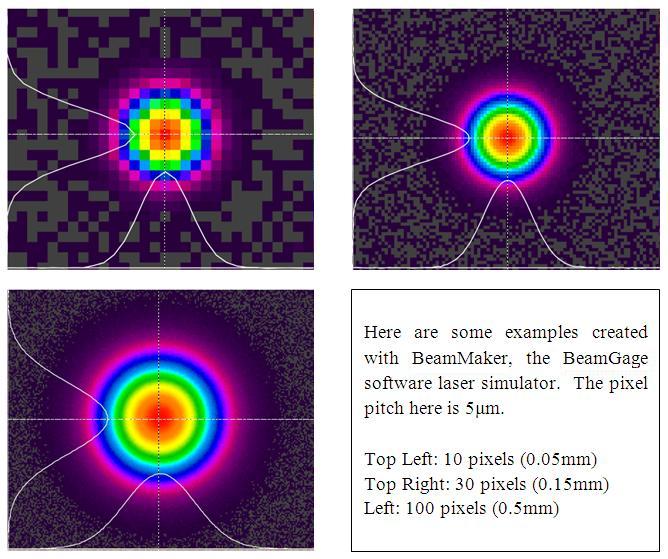 But I’m pretty sure your laser provider didn’t give you its specs in units of pixels, so let’s make a conversion here…

Pixel pitch (or pixel spacing) refers to the distance from the center of one pixel to the center of the next.  This is basically the same as the pixel size, except we’re not accounting for any inactive border of the CCD pixel.  In any case, this is the formula to get pixels/laser:

Now, pixels/mm is actually 1/pixel pitch, so the equation is really:

But what if your laser beam is 40 microns?  20? (This would correspond to roughly 9 and 4.5 pixels in the laser beam, respectively.)  There are two approaches to deal with a laser that has less than 10 pixels.

Ophir-Spiricon offers beam expanders which have the additional benefit of reducing power and energy density.  The typical 4x expander magnifies the beam four times, so your 9 and 4.5 pixels will hit the CCD at 36 and 18 pixels.  You can also look into microscope objectives if you need some serious magnification (up to as much as 100x).

2)    Forget about pixels; get a scanning slit profiler

Alternatively, throw out the CCD profiler altogether.  Well, on second thought, keep it.  You never know when you might need one.  But try using a scanning slit beam profiler instead.   A Photon NanoScan, for example, can measure a very small beam size directly without any optical magnification, sometimes as small as 4μm.

What do you find to be the biggest challenge when measuring small lasers?  (Let me know in the comments.)

An Easy Way to Measure M-Squared

How to Measure Laser Beam Width Regardless of Power Density